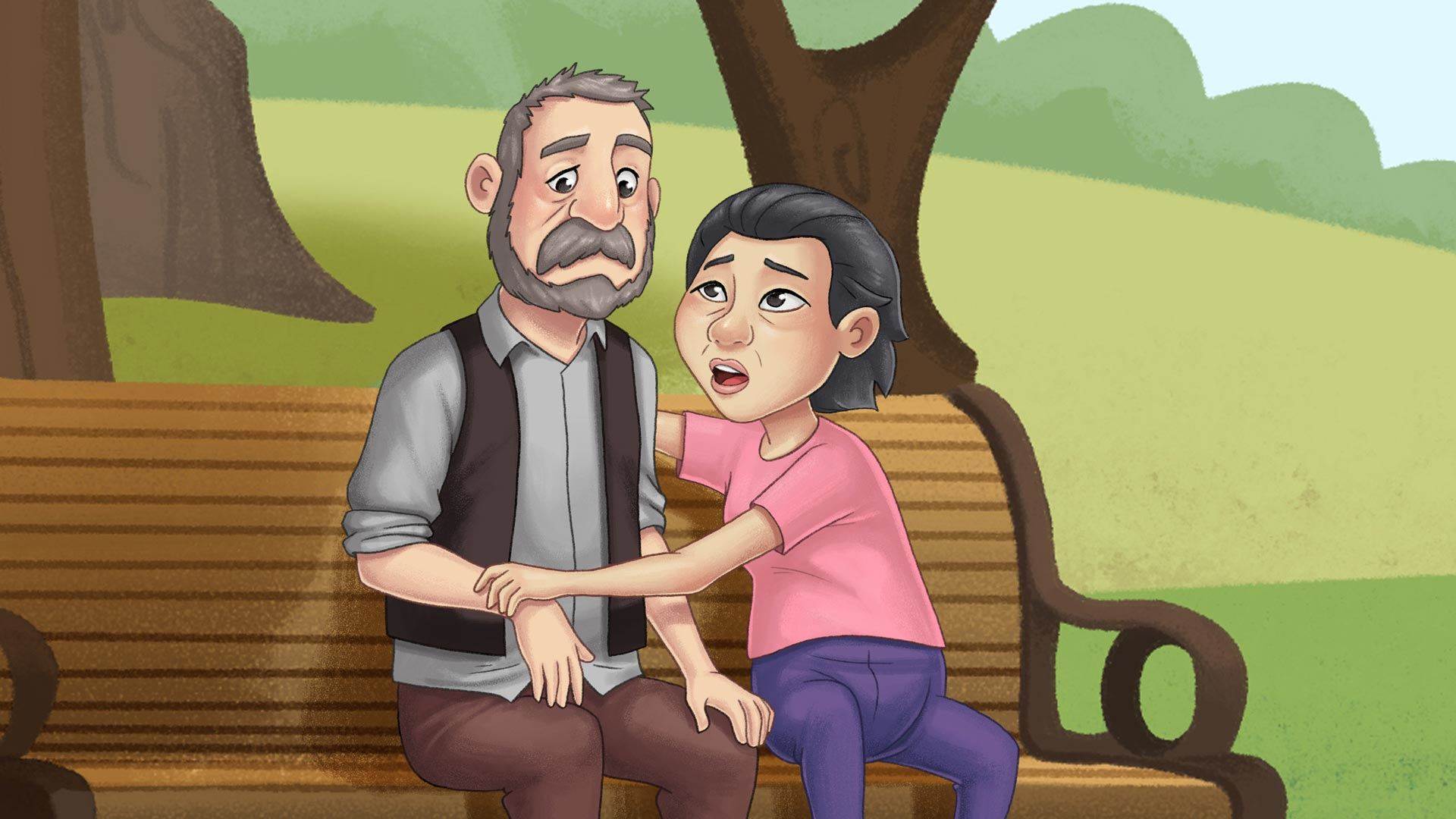 What is a stroke?

A stroke is a serious medical emergency and a major cause of death and disability all over the world. It occurs mostly in older adults, but can happen to younger adults and even children.

A stroke happens when oxygen-rich blood cannot reach the brain cells. Often this is because a blood vessel in the brain becomes suddenly blocked or bleeds. The brain is an oxygen-hungry organ; it needs about 20% of the body's total oxygen consumption, much more than its relative size and weight. When the blood supply to it is interrupted, brain cells suffer damage within minutes and start dying. This can have far-reaching consequences for the body.

Some people who have had a stroke will recover fully, while others may experience mild or severe disability that may last for the rest of their lives. Speedy treatment of stroke can be crucial to survival and recovery. For this reason, it is important to know how to recognise early signs of a stroke and react accordingly.

There are two main types of stroke - ischaemic stroke and haemorrhagic stroke. Once brain cells are damaged, they are unable to regenerate, potentially leading to persistent disability and even death.

Ischaemic strokes account for about 80% of all stroke cases. [1] [2] An ischemic stroke occurs when an artery supplying oxygen-rich blood into the brain becomes blocked and oxygen cannot reach the brain tissue. 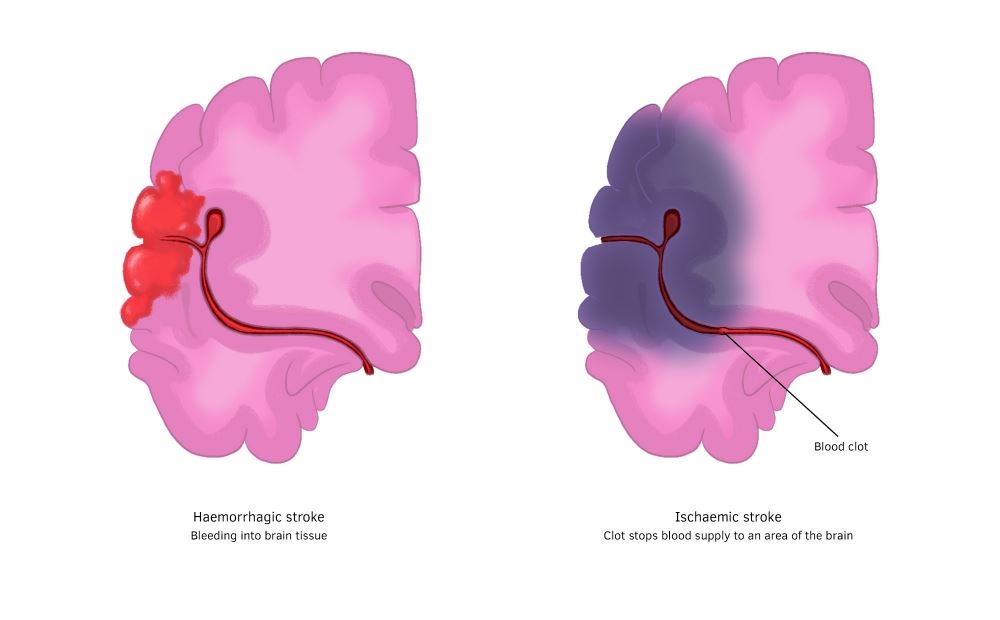 Different effects on the brain tissue during a haemorrhagic and ischaemic stroke.

A transient ischemic attack (TIA), also known as a 'mini-stroke', is caused by a temporary blockage or narrowing of a blood vessel leading to the brain. A person experiencing TIA will have signs and symptoms of a stroke, but will recover completely within minutes or a few hours. It is a preliminary sign for a stroke in the near future.

Risk factors for stroke include:

Since a stroke occurs suddenly, its signs and symptoms can appear very quickly. During a stroke, brain cells are starved of oxygen and begin dying within minutes. The expression 'time is brain' in stroke treatment represents the principle that more brain cells are lost as time passes. The time between the start of a stroke and its treatment is therefore crucial.

The FAST test is a simple set of early warning signs used to recognise a stroke. FAST is an acronym used to remember these points: 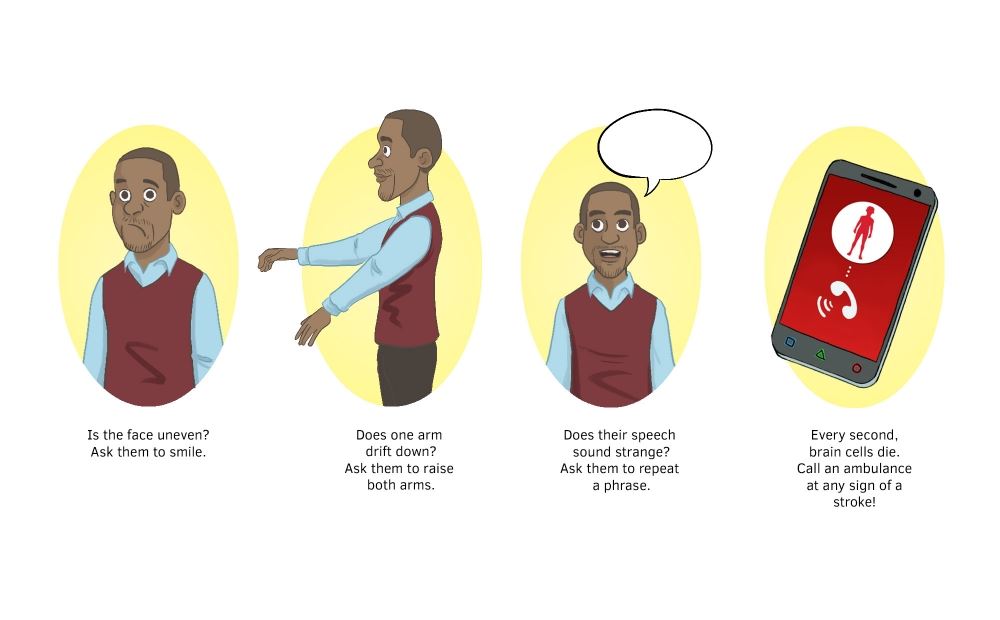 The FAST test is used to diagnose early warning signs of a stroke.

Symptoms of a stroke

Symptoms and effects of a stroke can include:

An inability to move or feel; a loss of muscle function or sensation.

A doctor will initially suspect stroke based on the symptoms and a physical examination.

A brain scan such as a computerised tomography (CT) scan or magnetic resonance imaging (MRI) is needed to identify the type, location, and severity of the stroke.

In many cases of stroke, heart activity will also be examined and monitored, as it may be related to heart conditions.

A scan that uses X-rays to create a 3D image of the body. This can detect abnormalities more effectively than a simple X-ray can.

A type of imaging that uses a magnetic field and low-energy radio waves, instead of X-rays, to obtain images of organs.

Treatment of stroke is broadly divided into two categories - treatment that is given during and immediately after a stroke occurs, and rehabilitation that takes place after the situation has stabilised.

Stroke treatment should be done by medical professionals. The immediate concern during a stroke is to restore normal blood flow to the brain. The treatment for the two types of stroke are very different. For an ischemic stroke, treatment involves dissolving the blockage in the artery. For haemorrhagic stroke, the bleeding must be stopped and the pressure on the brain relieved.

After the cause of stroke has been successfully treated, the rehabilitation stage can begin. Its general goals are to restore the person to normal function if possible and to prevent complications. The character, length, intensity and outcome of this stage are different for every person.

Rehabilitation follows a cycle composed of these steps:

After a certain period, the person's condition is reassessed and the cycle begins again, if needed.

People recovering from stroke are encouraged to change their lifestyle - to stop smoking, eat a healthier diet and become more physically active to have a healthy weight. In addition, medication may also be prescribed to treat specific problems.

In order to help a person adjust to and improve their condition after a stroke, other healthcare professionals can offer assistance, including:

The rehabilitation process also includes the affected person's family, who will be taught what to expect and how to adapt to the new circumstances.

People who have had a stroke are at increased risk of having another. For this reason, after a stroke a person will often be placed on medication that will lower the risk of another stroke happening. Medications to prevent clotting, lower blood pressure and reduce cholesterol levels have been shown to reduce the risk of recurring strokes.

A stroke can damage any area of the brain. As such, its effects can vary widely depending on which part or parts of the brain have been affected and to what degree.

In addition to the effects of stroke listed in the 'Symptoms' section above, long-term complications of stroke can include:

Stroke is a serious condition and a leading cause of death and disability throughout the world. Unfortunately, about a quarter of all people who have a stroke die within a month; about half die within a year. [1] Haemorrhagic stroke is particularly fatal, with nearly half of all victims dying within a month. [1]

For those who survive a stroke, rehabilitation will depend on the severity of the stroke. Many people will recover completely within weeks or months. More severe stroke can cause long-term or lifelong disability.

The risk of stroke cannot be completely eliminated, but there are many things you can do to lessen the chance of it happening. These are similar to the steps recommended for stroke rehabilitation and can include:

Knowing what stroke looks and feels like can help you recognise it if it happens to you or to others. A quick response will improve the chance of surviving a stroke.

A stroke is an interruption in blood flow to the brain that causes permanent brain injury.

Are there different types of stroke?

What is the FAST test for stroke?

The FAST test is a simple set of early warning signs for stroke that anyone can use to recognise stroke in themselves or in others. FAST is an acronym for: Face (is it droopy, flaccid, especially just on one side? Can the person smile?); Arms (can the …

What are the symptoms of stroke?

While anyone can have a stroke, it is more common in older adults. High blood pressure, smoking, a poor diet and obesity are also major contributors to the risk of stroke.

How is stroke diagnosed?

Stroke is diagnosed by its symptoms and a physical examination. Brain imaging scans are used to identify and locate the stroke.

How is stroke treated?

Immediate treatment for stroke is given at a hospital and concentrates on restoring normal blood flow to the brain. Once the situation has stabilised, rehabilitation can concentrate on regaining normal functions and adjusting to the post-stroke situation.

Can stroke be prevented?

The risk of stroke cannot be completely eliminated, but you can lessen the chance of it happening by stopping smoking, reducing high blood pressure, becoming more physically active and improving your diet.

What is the outlook for stroke?

Conversion disorder is a mental health condition in which a person experiences physical symptoms that have no physical cause. In the past, this condition has been known as hysteria.…

Multiple sclerosis (MS) is a disease of the central nervous system that interferes with the transmission of nerve impulses in the brain, spinal cord and optic nerves. This can lead to impaired sensation, movement and cognition.…

Alzheimer’s disease is a degenerative condition of the brain that causes problems with memory, thinking, language and behaviour. It is the most common form of dementia and a leading cause of disability in people over 65 years of age. Treatment aims to slow the progression of the disease and improve quality of life.…