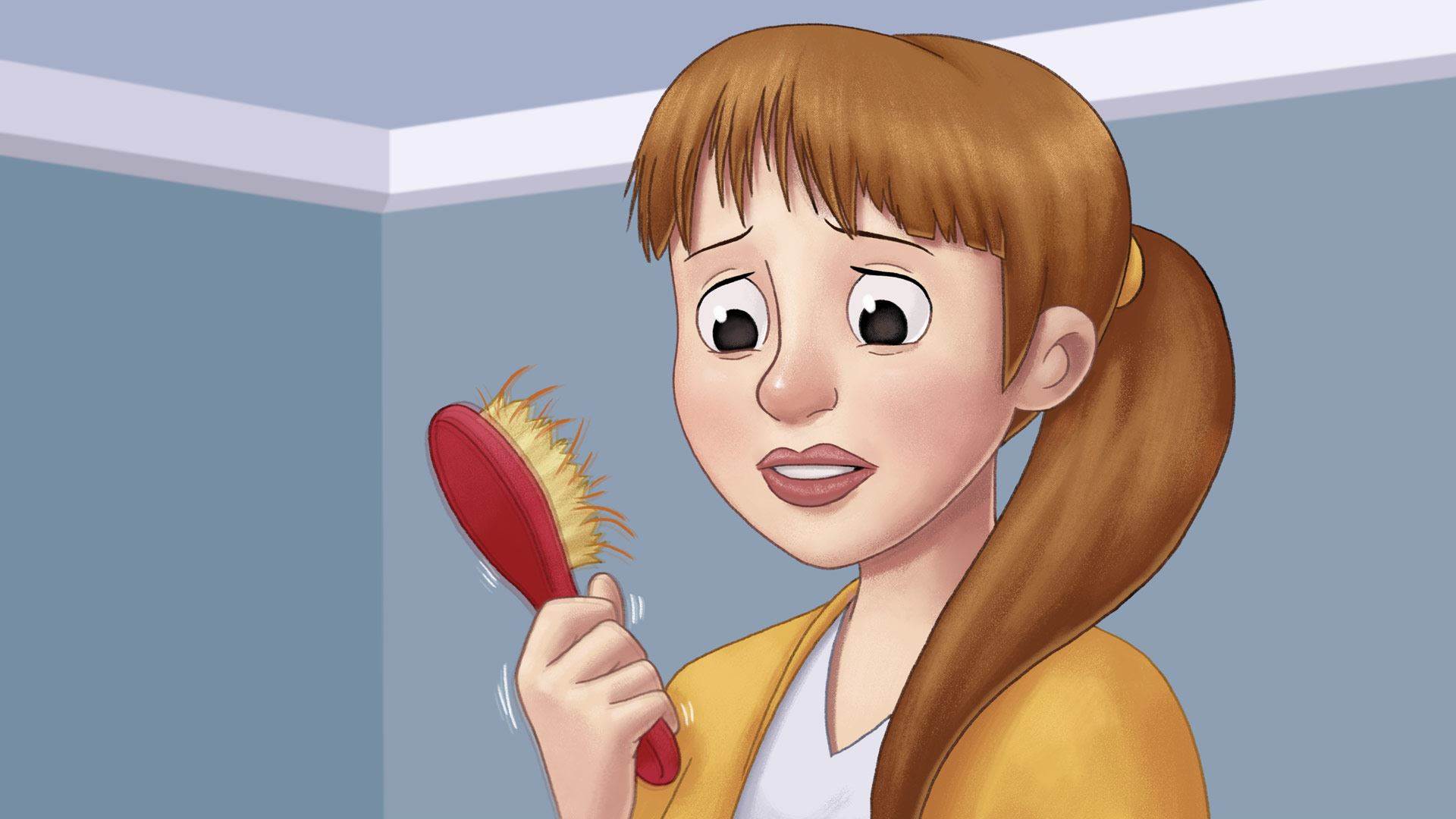 Hyperthyroidism, also called thyrotoxicosis, is a condition resulting from an overactive thyroid gland. It leads to an oversupply of thyroid hormones that help to control metabolism in the body. Hyperthyroidism is 4-5 times more likely to occur in women than men, affecting up to 2% of women at some point in their lives. [1]

The thyroid gland plays a key role in the endocrine system, which produces hormones that control bodily functions such as metabolism. If hormone levels are not within a normal range, this can affect the whole body, causing a wide range of symptoms and health problems.

The thyroid gland is located at the front of the throat, just above the hollow between the upper ends of the collarbones and below the Adam's apple (the larynx). It has two lobes that sit on either side of the windpipe. It is controlled by the pituitary gland, which sits at the base of the brain and secretes thyroid-stimulating hormone (TSH). 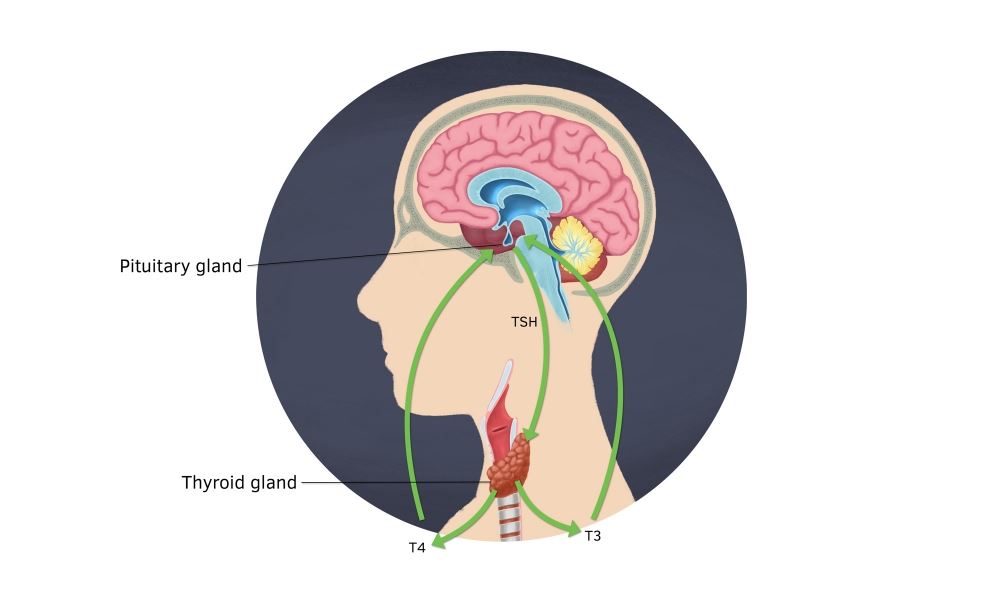 Stimulation of the thyroid gland by thyroid-stimulating hormone (TSH) to produce thyroid hormones (T3 and T4).

The thyroid hormones circulate throughout the bloodstream, regulating metabolism. The higher the levels of T3 and T4 are, the faster metabolism will be.

The nutrient iodine is very important in the production of T3 and T4. It is found in a range of foods including iodised salt, dairy products, seafood and bread made with iodised salt. Not having enough iodine in the diet can lead to an underactive thyroid as well as other health problems. Consuming too much iodine can lead to an overactive thyroid.

The sum of all chemical changes that take place within an organism to maintain growth and development and convert food into energy and building blocks.

There are many causes of hyperthyroidism. Some of the more common ones include:

More rare causes of hyperthyroidism include:

Graves' disease is the most common cause of hyperthyroidism. It is an autoimmune disorder in which antibodies produced by the immune system mimic the action of TSH and stimulate the thyroid gland to produce an excessive amount of thyroid hormones.

People with Graves' disease are also at an increased risk of a range of other autoimmune conditions including type 1 diabetes, pernicious anaemia, Addison's disease, coeliac disease and vitiligo.

Benign growths of the thyroid

Growths of the thyroid such as toxic multinodular goitre and thyroid adenomas can produce excess hormones. These growths are usually not cancerous.

Inflammation of the thyroid (thyroiditis) can cause the release of hormones stored in the gland. This causes a temporary form of hyperthyroidism. Because of the damage done to the thyroid, some people may go on to develop an underactive thyroid (hypothyroidism), for which they may require treatment.

Thyroiditis can be triggered by:

The recommended daily intake of iodine for adults who are not pregnant is 150 micrograms. Consistently consuming more than this can lead to hyperthyroidism.

The most common causes of taking in too much iodine include:

Human chorionic gonadotropin (hCG) is a hormone that is produced in high amounts in the first four months of pregnancy. Like the antibodies in Graves' disease, hCG can mimic the action of thyroid-stimulating hormone (TSH) and stimulate the thyroid gland to produce too much T3 and T4 hormones.

Some men can develop hCG-related hyperthyroidism due to hCG being produced by testicular cancer.

A chronic condition in which the adrenal glands are damaged, leading to a reduction of the hormones cortisol and/or aldosterone. These hormones are important for daily bodily functions and their deficiency can lead to a wide variety of symptoms.

A medication-based treatment, usually used in the treatment of cancers. There are numerous, different types of chemotherapy drugs that can be prescribed by a specialist. These can commonly be used alongside other cancer treatments such as surgery and radiotherapy.

A metal element that is used in medications that treat psychiatric illnesses.

There are many symptoms that can occur with hyperthyroidism and they can vary a lot from person to person.

A goitre is an enlargement of the thyroid gland and can appear as a lump or swelling on the front of the throat.

While enlargement of the thyroid gland (goitre) can occur in hyperthyroidism, it can also occur for other reasons, including underactive thyroid (hypothyroidism) and thyroid cancer. 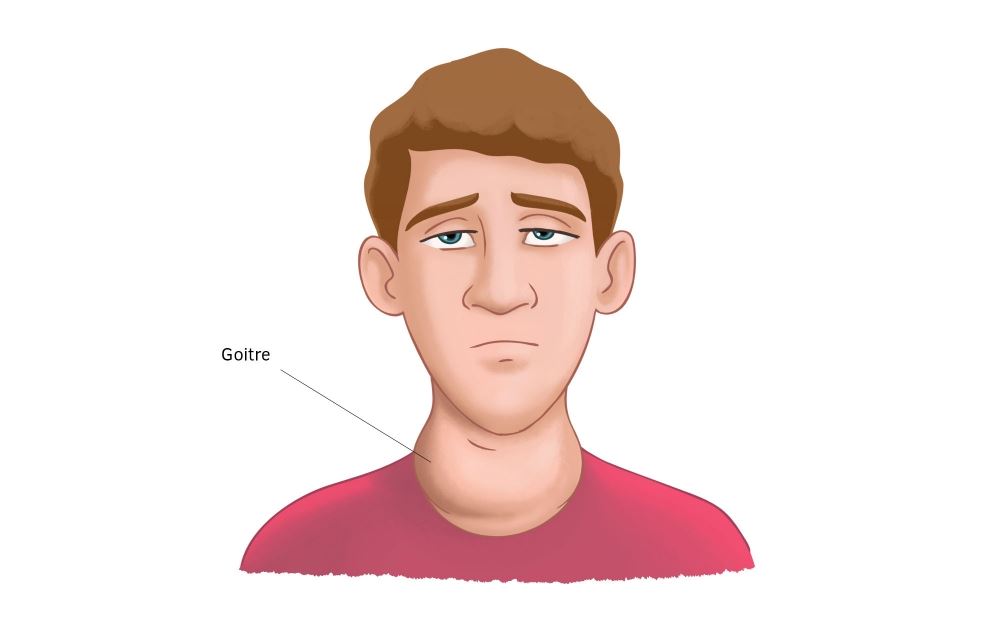 A goitre is an enlargement of the thyroid gland.

The periodic shedding of the lining of a woman's uterus. Typically occurring about every four weeks between puberty and menopause (except during pregnancy). The menstrual period varies between individuals, but typically lasts 3-5 days.

There can be many reasons why thyroid hormone levels are elevated and not all are due to hyperthyroidism. The doctor will consider your symptoms and health history.

A physical examination can help identify signs of hyperthyroidism. The exam can include: 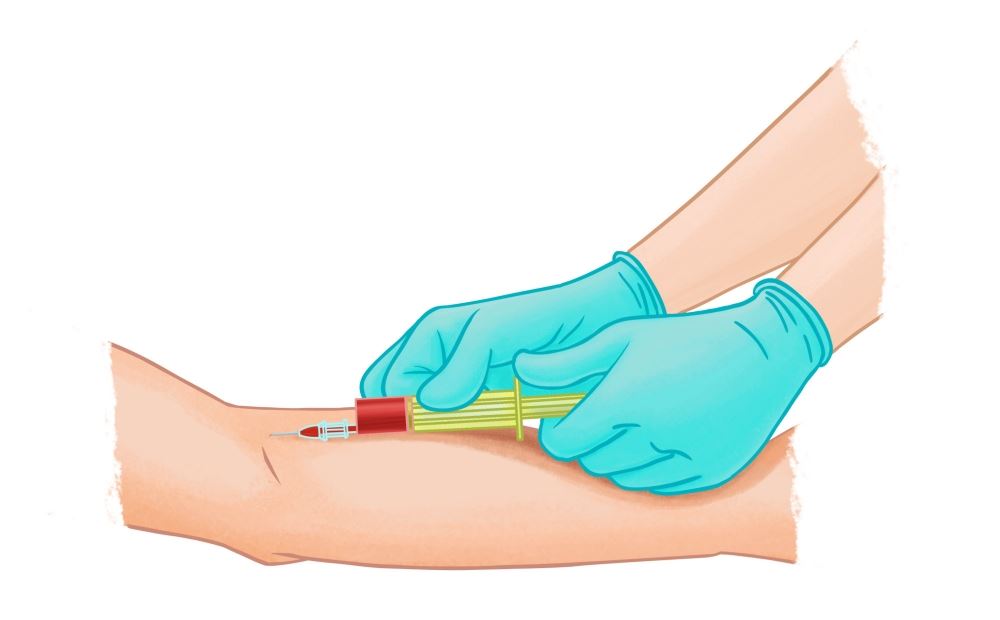 A blood test can be used to measure thyroid hormones.

During a nuclear thyroid scan, iodine is marked with a radioactive label called a tracer and absorbed by the thyroid from the bloodstream. Measuring the amount of iodine the thyroid takes up can help to determine what is causing the hyperthyroidism. It is particularly useful for detecting toxic nodules and areas of the gland that are overactive.

A picture of the thyroid is obtained using ultrasound and can show enlargement of the gland and indicate some changes in the gland tissue.

Treatment of hyperthyroidism will vary depending on the cause, the symptoms and other aspects of general health, for example, whether or not a woman is pregnant.

Beta-blocker drugs such as propranol can be prescribed to help relieve symptoms such as shaking, a racing heartbeat, sweating and anxiety until antithyroid medications can take effect.

Antithyroid drugs such as carbimazole and propylthiouracil work by reducing the amount of hormone the thyroid produces. They are usually taken for around 12-18 months.

Taken by mouth, radioactive iodine is taken up by cells in the thyroid, where the radiation destroys the cells over the following weeks or months. This reduces the amount of hormone the thyroid can produce. Some people may require more than one dose.

Thyroid surgery usually involves the removal of all or part of the thyroid gland. This operation is performed under a general anaesthetic in a hospital. It will often require you to stay in hospital for 1-2 days.

An anaesthetic given to a person to put them to sleep while having an operation or medical procedure. Afterwards, the person regains consciousness and usually has no memory of the procedure. A general anaesthetic is given in hospital by a specialist called an anaesthetist.

Complications with hyperthyroidism can depend on what type of the condition it is and the treatment.

People with Graves' disease may develop symptoms affecting their eyes. In this condition inflammatory cells accumulate in the soft tissues around the eyes, causing swelling, particularly of the eyelids and the muscles that move the eyes. 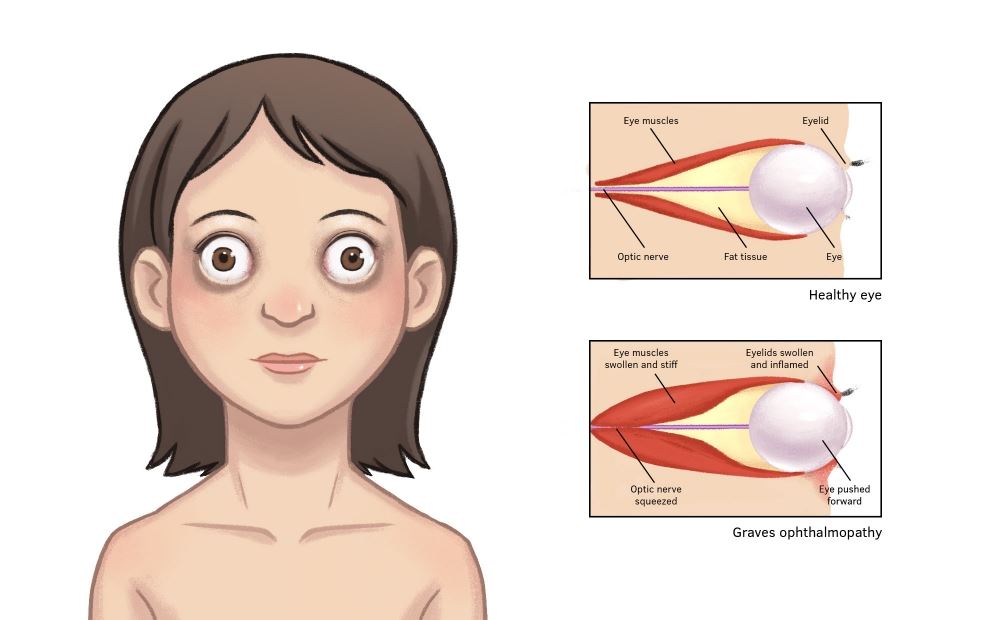 Graves' ophthalmopathy results in bulging of the eyes.

Also called a thyroid storm, this is an extreme form of hyperthyroidism that is a medical emergency and requires intensive treatment. It can be triggered by thyroid surgery or radioactive iodine treatment.

Hyperthyroidism can lead to a fast heart rate, abnormal heart rhythm (atrial fibrillation) and in severe cases, heart failure, which can be life-threatening.

Treatments, including antithyroid medications, radioactive iodine and thyroid surgery can lead to an underactive thyroid, which is also known as hypothyroidism. This is treated by taking replacement thyroid hormone daily. This medication will usually need to be taken permanently.

Side effects of antithyroid medications

Antithyroid medications can cause a range of side effects including nausea, vomiting and rash.

Agranulocytosis, which a severe reduction in white blood cells, is a rare but serious complication (0.2-0.5% of cases [2] ) that can be life-threatening. Symptoms include fever, mouth ulcers and sore throat.

Complications due to surgery

Complications that can occur with surgery include:

The nerve that controls the function of the voice box to produce speech, allow breathing and supply sensation to the voice box.

Prognosis depends on the type of hyperthyroidism, the severity of the symptoms and treatment. It is not uncommon for people to develop hypothyroidism after treatment, although it may take years to develop.

Hyperthyroidism (also called thyrotoxicosis) is an over-active thyroid gland. It leads to an oversupply of several hormones that control metabolism in the body.

What are the symptoms of hyperthyroidism?

There are many symptoms that can occur with hyperthyroidism, and they can vary greatly from person to person. Symptoms can include a fast pulse, a fast or irregular heartbeat, shaking, agitation and anxiety, frequent bowel movements and diarrhoea, …

There are many causes of hyperthyroidism. Some of the more common ones include autoimmune reactions, abnormal growths of the thyroid, inflammation of the thyroid, and taking in too much iodine.

Anyone can get hyperthyroidism, but it is about four to five times more common in women than in men.

How is hyperthyroidism diagnosed?

Hyperthyroidism is diagnosed with a physical examination and blood tests to check hormone and antibody levels. In some cases, a thyroid scan using radioactive iodine may be necessary to determine the type of hyperthyroidism.

How is hyperthyroidism treated?

Hyperthyroidism can be treated with anti-thyroid medications, taking radioactive iodine to destroy thyroid cells and surgery to remove the thyroid.

Can hyperthyroidism be prevented?

Left untreated, hyperthyroidism can lead to serious health conditions including heart damage; it can, in severe cases, be life-threatening.

What increases the chances of developing hyperthyroidism?

Women are more likely to develop hyperthyroidism. Pregnancy can trigger the condition in some women. Taking in excessive iodine (via medications, food or medical tests) can also cause some forms of hyperthyroidism.

What happens if hyperthyroidism occurs during pregnancy?

Hyperthyroidism can be treated during pregnancy. Your doctor will take you through your best options for treatment.

Carcinoid syndrome describes a set of symptoms caused by a carcinoid tumour that secretes various naturally-occurring chemicals, such as serotonin, histamine and prostaglandins. Symptoms vary, but can include flushing, diarrhoea and wheezing.…

Hyperparathyroidism occurs when the parathyroid glands are overactive and produce too much parathyroid hormone (PTH). In turn, this overproduction of PTH causes high levels of calcium to be absorbed into the blood from the bones and food.…

Hypoparathyroidism occurs when the parathyroid glands are underactive and don’t produce enough parathyroid hormone (PTH). In turn, this underproduction of PTH causes low levels of calcium to be absorbed into the blood from the bones and food.…

Hypothyroidism is the result of an underactive thyroid gland. It leads to an undersupply of hormones that control metabolism in the body. If hormone levels are not within a normal range, this can affect the whole body, causing a wide range of symptoms and health problems.…