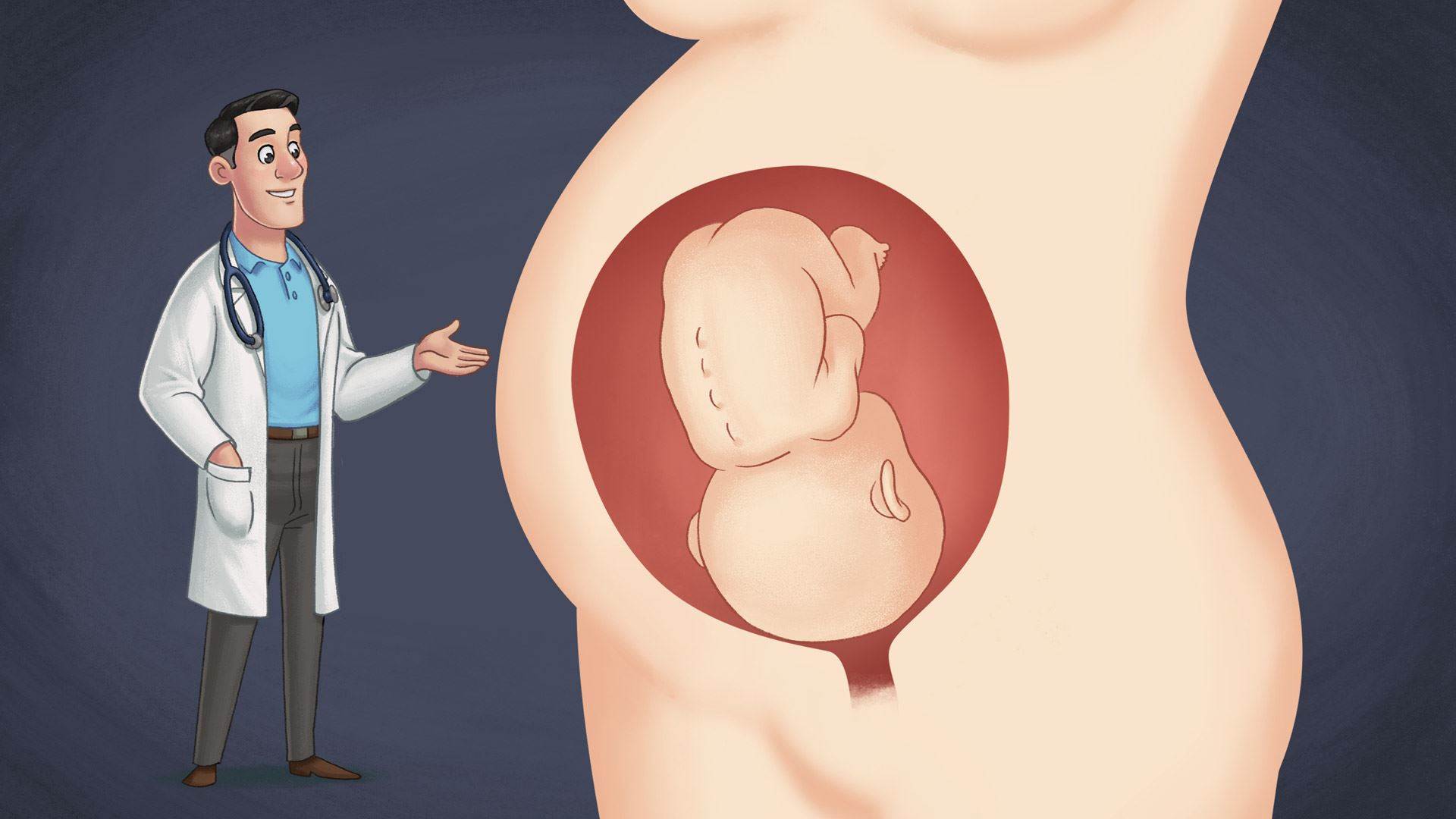 When a foetus starts developing in the uterus, it is very small and has a lot of room. It floats around and changes position freely.

As a foetus grows, it starts filling up the available space inside the uterus. Most foetuses spend some time lying sideways in the uterus. At 28 weeks' gestation, one in five of every foetuses are in the breech position (head up, buttocks down). Eventually, however - normally at around 36 weeks - the majority of babies finally settle with their head down toward the mother's vagina. When childbirth begins, the baby's head is first to emerge from the birth canal, followed by the rest of the body.

In a few cases, the foetus is not facing this way. This might lead to a complicated birth process and may pose risks to the baby and mother. In these cases, a caesarean section (C-section) may be considered to help deliver the baby.

If your baby has not settled into a headfirst position by week 32, follow-up is recommended. Around week 36, an ultrasound scan can check the foetal position and your doctor or midwife will explain the options for the final weeks of your pregnancy.

The hollow organ of the female reproductive system that is responsible for the development of the embryo and foetus during pregnancy. Also known as the womb.

The period of foetal development in the womb from conception to birth.

The chance of incorrect foetal positioning at birth may be increased in certain circumstances, including:

A congenital condition characterised by an abnormally large head.

The birth position is determined by your doctor or midwife palpating (examining by touch) your abdomen. Ultrasound is used to provide a clear picture of the foetus's position.

The part of the body that lies between the chest and the pelvis.

In more than 95% of births, the foetus's head is facing downward towards the mother's vagina. However, this can occur in several ways.

This is the most common and favourable birth position. The baby's head is down near the mother's vagina, with the face directed towards the mother's rear. Its head is also bent down, so the chin is resting against the chest and the feet are crossed. 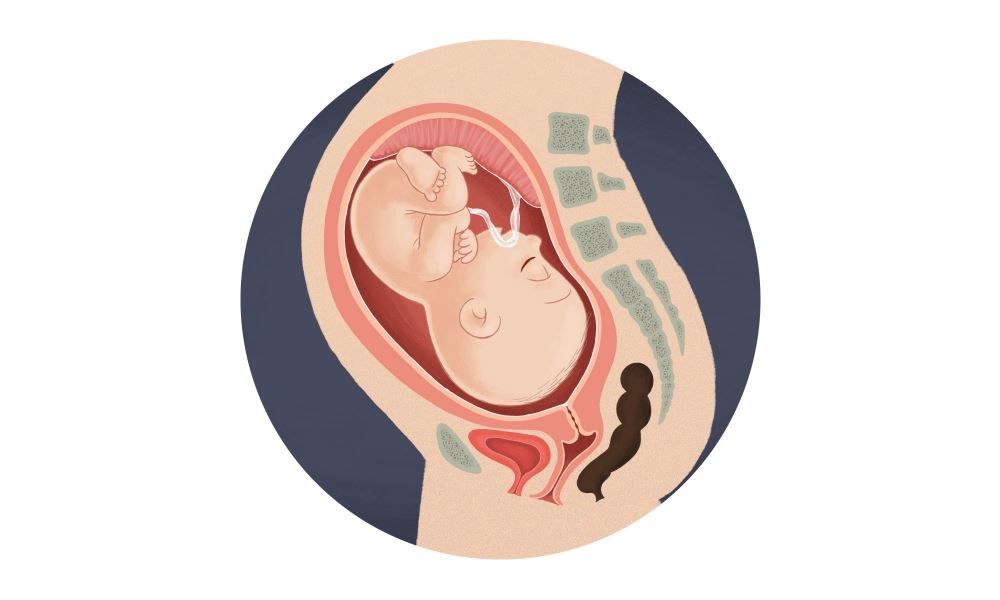 The baby's head is down near the mother's vagina, but the face is directed towards the mother's front. In the weeks leading up to birth, 10-15% of foetuses are in this position, but most of them rotate their body shortly before birth and only 5-6% are born while in this position. [1] [2] [3] The OP position - also known as 'face up' or 'sunny-side up' - may cause a longer and more difficult labour. 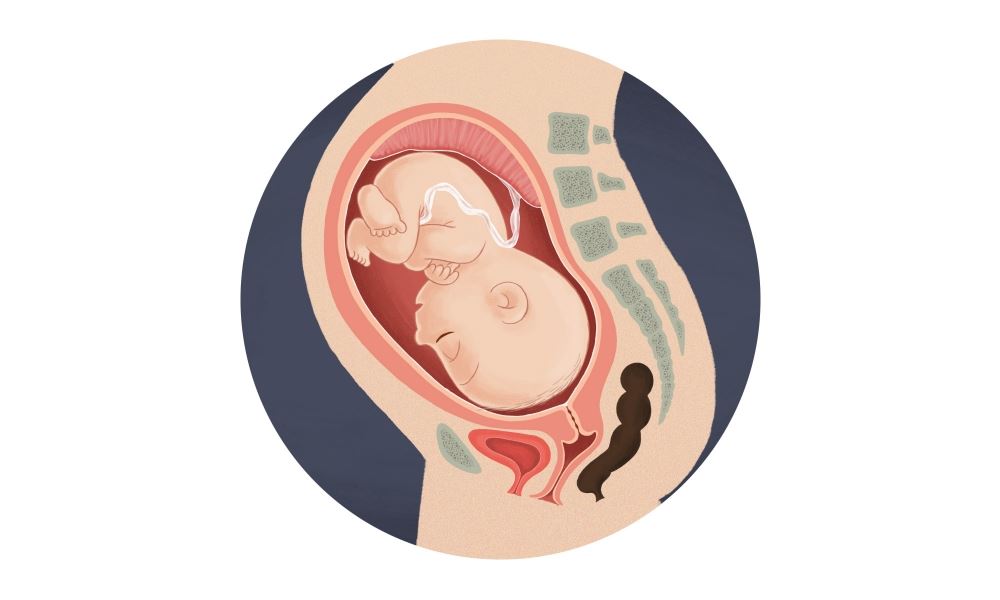 The baby's head is down near the mother's vagina, with the face towards the mother's side. This is an uncommon position. Forceps or vacuum extraction can be used to rotate to assist birth, if required. A caesarean section may be performed in certain circumstances.

In these rare presentations, the baby is in the normal OA position, but the baby's face is first to enter the birth canal rather than the top of the head. This is due to the chin pointing out rather than resting against the baby's chest. These presentations are usually discovered only once labour has started.

In the face presentation, which occurs once in every 800-900 births, the baby's entire face is first to enter the birth canal. [4] [5] [6] [7] [8] A vaginal examination at the start of labour will reveal this, as your doctor of midwife can feel the features of the face with their fingers. A baby in face presentation can be delivered normally, although there may be difficulties that may raise the need for a C-section. A baby born in face presentation can sometimes sustain bruises to the face, but these generally disappear shortly after birth. 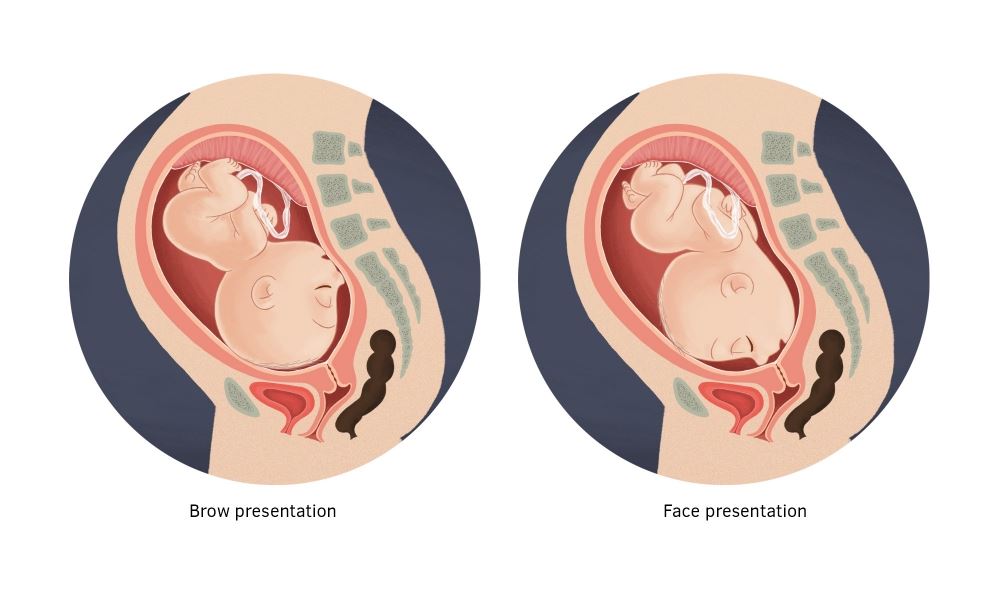 Compound (or complex) presentation occurs less than once in every 400-1200 births. [9] [11] In this presentation, a limb (usually an arm or hand) is lying near the birth canal alongside the head. This presentation requires extra care during labour, but the limb will usually slide back during the birth process.

About 3-4% of babies are in the breech position when labour starts. [10] [11] [12] [13] The baby's buttocks are positioned down near the mother's vagina, while baby's head is facing upwards. There are several variations of the breech position: 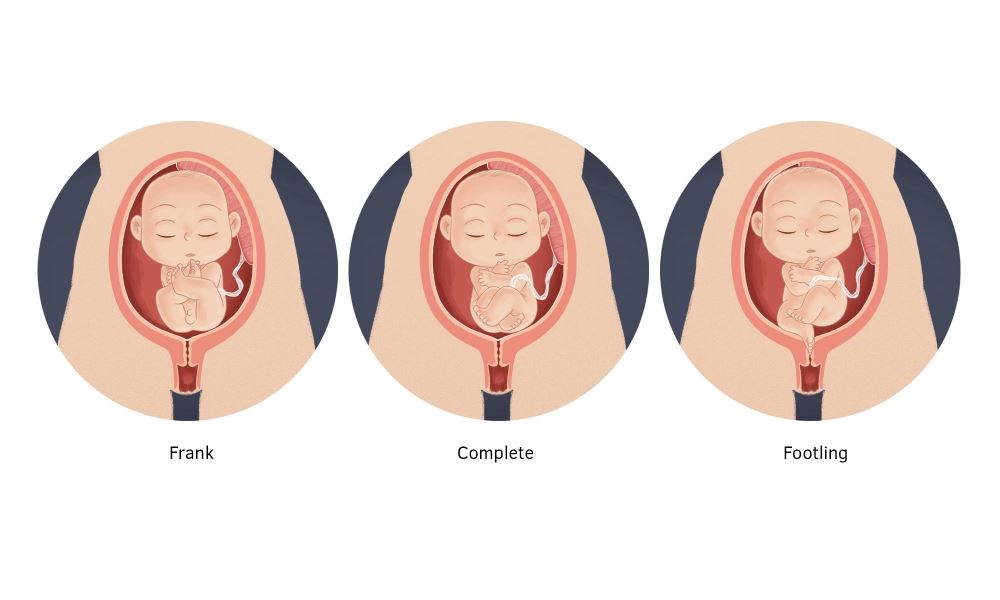 In this position, the baby is lying sideways with its shoulder resting against the mother's pelvis. As noted above, most foetuses will lie sideways in the uterus at some point in the pregnancy. A foetus who maintains this position up to birth is a rare case, occurring only once in every 200-400 births. [9] [10] [11]

A baby in the transverse position at labour cannot be born by vaginal delivery; a C-section must be performed. 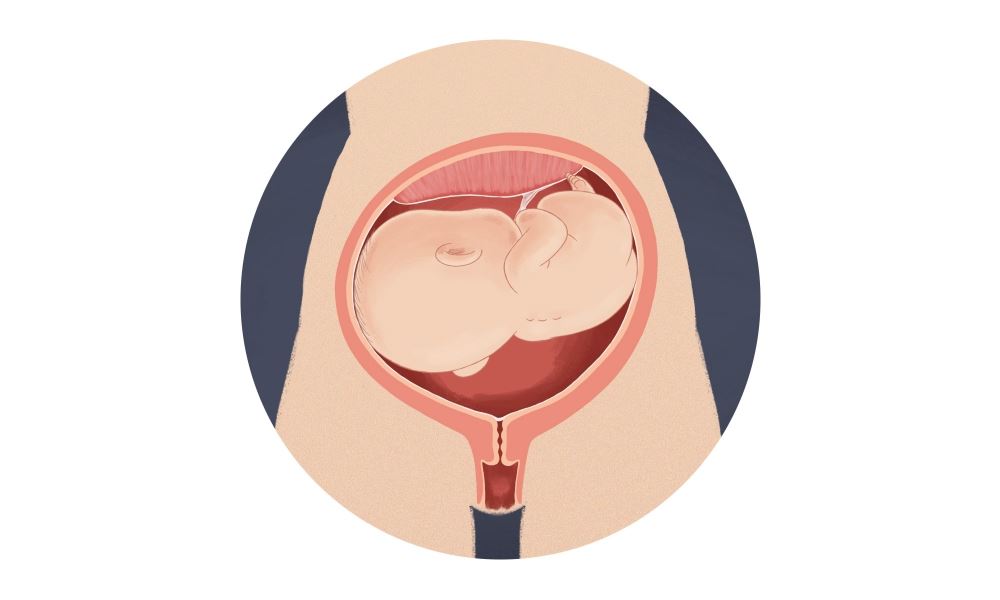 In uncommon cases (once every few hundred births), the umbilical cord may be the first to enter the birth canal, below the body (head or buttocks) of the baby. This can be a cause for concern, as the umbilical cord is the baby's lifeline. If the cord is under pressure and is blocked during delivery (normally by the baby's head passing through the birth canal), the baby could be in danger. 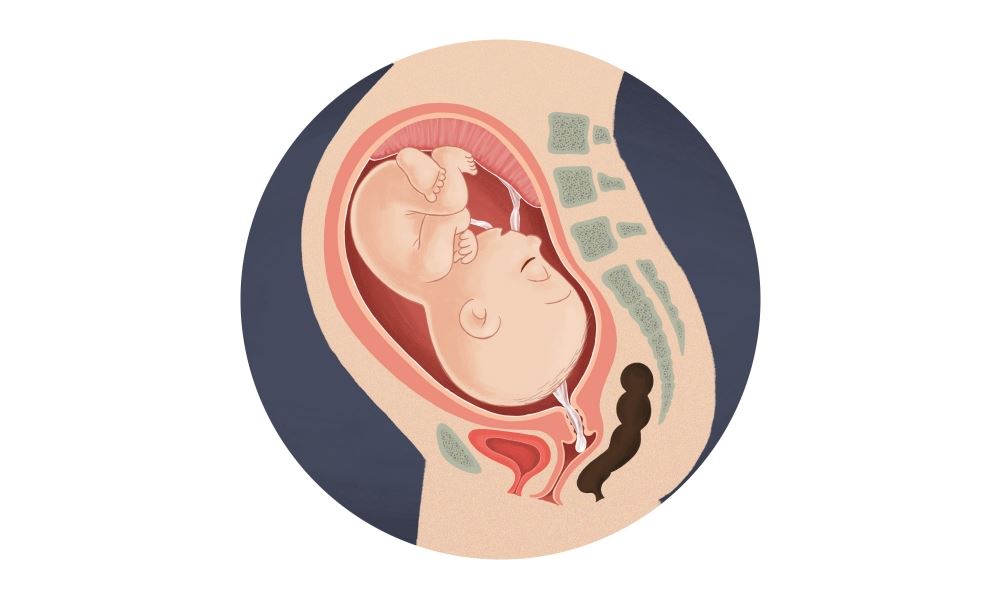 Cord presentation, or prolapse, during delivery.

Zayed F. Amarin Z. Obeidat B. et al. (2008) Face and brow presentation in northern Jordan over a decade of experience. Archives of Gynecology and Obstetrics 278:427–430.

If your baby is still incorrectly positioned by the third trimester, some things can be done to guide them into the correct position. Some of these methods will only be performed by a medical professional, others you can try yourself, but it is highly advisable that you consult with your doctor beforehand.

External cephalic version (ECV) is a medical procedure and can be attempted between 32-37 weeks of pregnancy. Your doctor will place their hands over your abdomen, with one hand over your baby's head and the other on its buttocks, and coax the baby's body toward the correct position. Your doctor will monitor the baby's heart rate using a foetal heart rate monitor, and will often use ultrasound to get a clear picture of the foetal position, the uterus and the amount of amniotic fluid in it.

The success rate of external cephalic version varies (30-61%) and depends on the experience of the doctor performing it. [12] [14] Generally, the method works about half the time.

If the baby is still in a non-optimal position when labour starts, there are several options your doctor or midwife can consider:

The part of the body that lies between the chest and the pelvis.

The fluid surrounding and protecting the foetus inside the uterus during pregnancy.

The bony structure in the lower part of the body trunk that connects the base of the spine to the legs. The pelvis protects important organs, such as the bladder and bowel (and in women, the uterus), and anchors thigh and abdominal muscles.

One third of a period of time. Often used to describe the three stages of pregnancy, in which each trimester is about three months long.

The hollow organ of the female reproductive system that is responsible for the development of the embryo and foetus during pregnancy. Also known as the womb.

What is the normal birth position for a baby?

The large majority of babies are born with their head down near the mother's vagina, with the face directed towards the mother's rear. The baby's head is bent down so the chin is resting against the chest.

Why is my baby not in the right position?

Most foetuses spend some time lying sideways in the uterus. At 28 weeks, one in five foetuses are in the breech position (head up, buttocks down). Eventually, at around 36 weeks, the majority of babies are positioned with their head down toward the …

What is the breech position?

The breech position is when your baby is in the womb with its head upward and buttocks facing down, near the vagina.

How common is the breech position?

About 3-4% of babies are in the breech position during labour.

What is a transverse position?

What is the face presentation?

In this rare presentation, the baby is in the normal head-down position, but the baby's face enters the birth canal first, rather than the top of the head. This is because the chin is pointing out rather than resting against the chest. This presentation is …

How can I know what position my baby is in?

Your doctor or midwife can often have an indication of your baby's position by feeling your abdomen. A clear picture is provided by an ultrasound scan.

Can my baby be shifted to the right position?

There are some methods that can help a baby shift into the correct position. External cephalic version (ECV) is the most effective method. It can be attempted between the 32nd and 37th weeks of pregnancy. Your doctor will place his hands over …

What can be done during birth to correct my baby's position?

If your baby is in an incorrect position once labour has started, your doctor or midwife can try to shift it around with their hands and/or instruments (such as forceps) via the birth canal. If that does not help, in certain …

What is a cord prolapse?

A cord prolapse is when the umbilical cord enters the birth canal first, before the baby, usually after the mother's waters have broken. This is considered to be an emergency as the cord, which is the life line to the baby, can subsequently become blocked during …

A guide through normal pregnancy

The average pregnancy is counted as 40 weeks, starting from the first day of the mother’s last period. Pregnancy is divided into three trimesters, with different stages in each. The development of a pregnancy can be followed week by week, but it’s important to remember the experience varies for every mother and baby.…

During pregnancy, you need to make sure both you and your baby get all the nutrients you need. Not only does your baby need a range of nutrients for their development, there is increasing evidence that what you eat during pregnancy can affect your baby's health throughout their lives.…

Fertility is the ability to have a baby. This requires sperm from a man to fertilise an egg from a woman. Follow the numerous stages in this journey of the sperm to reach the egg.…

Labour is the process through which a baby is delivered from a woman’s womb to the outside world. Stages of labour that pregnant women commonly experience include uterine contractions, dilation of the cervix and the rupturing of foetal membranes to release amniotic fluid, or ‘water breaking’.…